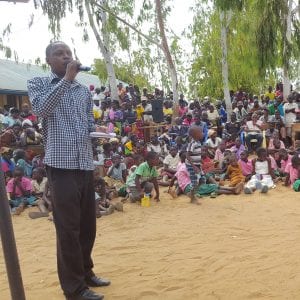 Kupenda’s Disability Awareness Days are usually attended by hundreds of people, many of whom travel several hours to join the celebration. The day often starts with a parade led by people pushing children in wheelchairs while singing popular Swahili songs. Children from the special needs schools that Kupenda supports perform dances, songs, poetry and plays. Speakers often include the district education officers and Kupenda’s Kenyan leadership team. Community members who attend these days develop greater awareness and compassion for children with disability and learn that they need to support and encourage all children, no matter what their ability, to reach their full, God-given potential. During these days, Kupenda staff also help many children with disabilities and their families connect to proper education and medical resources.

The United Nations has designated August 12 International Youth Day with the goal of: “Celebrating young people’s contributions to conflict prevention and transformation as well as inclusion, social justice, and sustainable peace.” A few years ago Kupenda planned a special campaign on this day that mobilized the students at Gede Special School (GSS) as disability justice advocates. The event was arranged in response to Mr. Mutwiri, their beloved occupational therapist, being transferred to a new site and leaving GSS without a therapist. In response, Kupenda led the students in organizing a peaceful roadblock to attract the attention and a response from the Kilifi County Governor. The Governor was moved by the students’ ability to stand up for their rights and soon made sure that Mr. Mutwiri was transferred back to GSS. Shortly after the demonstration, the government also began to provide funding for Mr. Mutwiri’s full salary so he no longer needed to depend on support from Kupenda. Read more about the students and their demonstration here!

When Kupenda first met Maudy, he was chained to a tree to keep him from wandering off on his own and becoming lost. Maudy is on the autism spectrum and most people in his community and family believe his disability was caused by a curse. During Kupenda’s recent World Autism Day celebration, however, Maudy’s community and family learned about the true, medical causes of autism and how to support and include children like Maudy. Read Maudy’s full story here.

Kupenda brings community members together to celebrate people with disabilities through awareness days, such as International Cerebral Palsy Day. Many of the children in Kupenda’s programs have cerebral palsy, which most people in their communities believe is caused by witchcraft. However, during these awareness days, residents learn about the true, medical causes of disabilities like cerebral palsy and how to support and include people with disabilities in their communities.  Read more about our recent  Cerebral Palsy Day celebration here.